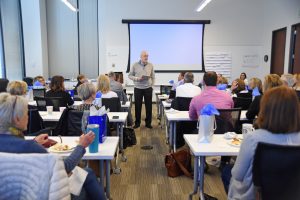 March 9, 2018 - Perry & Co. Realtors who gathered together for their annual sales retreaton March 7thwere given a big announcement. In his welcoming address, R. Don Larrance announced that he was stepping down from his role as CEO and turning the title over to his son, Jon Larrance. Don, an original founding partner of Perry & Co., has been at the companys helm since 1992, will maintain a new part-time position as the companys Chief Financial Officer.

Jon has been the driving force of innovation and adaptation in the ever-changing real estate industry since joining the company full-time in 2002, said Don. Jons contributions to Perry & Co. thus far have been many and varied. Jons initial role at Perry & Co. was to move its systems to the digital age by implementing shared and remote server environments. He hasoverseen all technology facets for the company ever since. 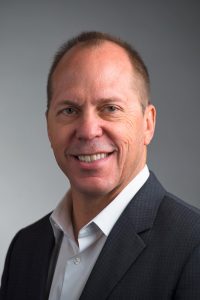 In 2007, Jon established the companys relocation department and took on the role of Relocation Director two years later. He helped the department gain notoriety by facilitating the company's admission into the prestigious Leading Real Estate Companies of the World(LeadingRE) organization in 2009. LeadingRE is an invite-only network of over 500 of the worlds market-leading independent residential brokerages. The company was admitted as Denver's original memberinto the highly exclusive Luxury Portfolio International in 2012, thanks to Jons efforts.

Jon's first order of business at the Retreat was to announce a revised company values statement, and a company matching employee 401(k)plan.

Upon hearing the news that Perry & Co. will continue to be a family-owned business, companyRealtors were quick toacknowledge Jons enthusiasm and commitment to making Perry & Co. a local luxury agency is contagious, as one agent stated.

Jon has been recognized for his real estate contributions to the Denver Metro Association of Realtors' Board of Directorswith a 2012Inman NewsInnovator Award. Hehas earned accreditations from the Relocation Directors Council, Worldwide ERC, and he currently sits on the REcolorado MLSBoard of Directors.

I am grateful to my father and his former partners for creating such a great company and tradition of leadership in the Denver real estate community. I look forward to the challenge of moving the company farther forward and positioning it for even more success, Jon stated.

Dons legacy on the Denver real estate community is long-lasting, having been awarded Realtor Emeritus by the National Association of Realtors in 2011, Denver Board Managing Broker of the Year in 2004, and Denver Board Realtor of the Year in 1998. He has served in other real estate capacities as the 1996 President of the Denver Board of Realtors, Senior Vice President of the Institute of Real Estate Management, where he also served as a teacher for 15 years, and a Colorado Association of Realtors' Director.

Founded in 1971, Perry & Co. is one of the very oldest real estate companies in Denver, and home to 55 agents. They have three offices throughout the Denver Metro area.